In the U.S. population, 36 percent or approximately 110 million people are presbyopic.1 With the longevity of baby boomers and the growth of Gen Xers into this category, the presbyopic population is expected to increase.1 But despite this significant demographic growth, there are limited non-surgical options that have been introduced to treat presbyopia. Glasses, contact lenses, and reading devices which magnify or throw more light on the reading field are more pervasive, but novel non-invasive therapeutic treatment has not kept pace with the potential demand.

In the next few years, however, there will be a number of topical pharmaceutical options for patients that will treat presbyopia indirectly or treat the underlying cause. These potential options will give eyecare providers more options and patients more choices to manage this age-related problem.

The second group includes what are called pharmaco-refractive products and the use optical phenomenon (increasing the depth of field) to address the symptoms of presbyopia but do not fix the root cause of the problem. This group is closer to getting to market than the former.

Because the “true” pharmaceutical therapies for presbyopia are more in the distant future we will look primarily at the pharmaco-refractive therapies.

The use of pinhole optics (PHO) to increase the depth of focus has been around for decades. Many of the medical devices that have been used to address presbyopia have capitalized on this optical phenomenon.3 Eyecare practitioners currently use PHO to double check for refractive accuracy with a pinhole occluder.4

Devices such as AcuFocus’s Kamra inlay have shown to be a safe and effective treatment for presbyopia (as followed by a 4-year post-implant study).5,6 Despite the need of some of the devices to be explanted (<7 percent), including those that were necessitated by events (not related to the device), patient outcomes and patient satisfaction validated both effective as well as well tolerated.

Based on the concept of PHO to treat presbyopia, the new class of eye drops that will be on the market soon create PHO using a miotic. However, a miotic such as pilocarpine alone, unless selectively dosed, is problematic to use because of its side effects.7 These side effects include headache, redness, cillary spasm, brow ache, accommodation, and even uveitis. Another concern with miotics is their varying effects of onset, duration, and durability due to iris color.8

Despite the shortcomings of miotics, pharmaceutical companies and clinical scientists have moved forward to develop pharmaco-refractive products to treat presbyopia. The formulations have been combining the miotic with agents to temper the side effects while allowing the miotic to work or by precise titration of the dose. While pilocarpine is likely the most common miotic used for these combinations as well as a stand-alone, other actively used miotics are carbachol and aceclidine.

The tempering components of the drug formulation are: – Brimonodine to reduce cillary muscle contraction 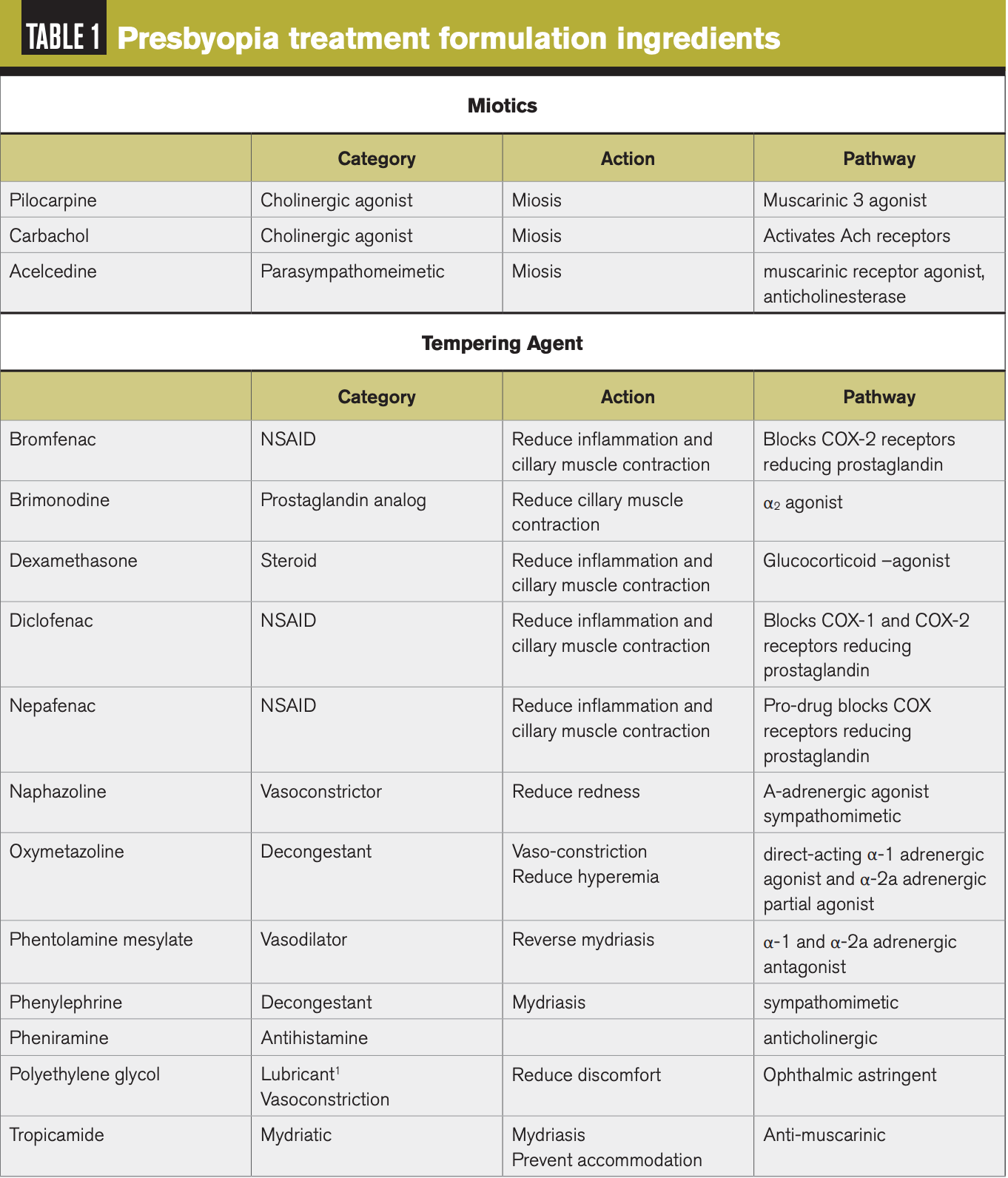 In the company’s Phase II trial, about 70 percent of subjects had at least a 2-line improvement in uncorrected near visual acuity (UCNVA).9 More data from additional Phase II studies is expected later in 2020.

Allergan is in process with its Phase III (300+ subjects) using AGN-199201 and AGN 190854 together in varying dosages and individually as well as with a carrier vehicle. The study should be completed in late 2020 with approval and launch for the product (Presbysol) planned in late 2021 unless it is COVID delayed.10

Ocuphire Pharma’s Nyxol is a combination asset using low-dose pilocarpine combined with phentolamine mesylate, a non-selective α-1 and α-2a adrenergic antagonist.This combined product offers a synergistic effect to produce ≥30 percent decrease in pupil size. In addition, Nyxol provides durability because the decrease in pupil size lasted up to 15 days in almost 60 percent of the subjects under both photopic and mesopic conditions. The product is delivered in a kit form with phentolamine mesylate given at bedtime to mitigate concerns with hyperemia and low-dose pilocarpine given the following day or days later as needed to enhance the effect. This may present challenges for patient compliance in the clinic setting.11

Orasis Pharma’s CSF-1 developed an oil-based formulation which is a proprietary combination of a miotic and vehicle which may contain a non-steroidal anti-inflammatory drug (NSAID). This parasympathomimetics creates a pinhole effect, and the NSAID precludes discomfort due to ciliary spasm and minimizes the risk of uveitis, according to the company.

Its Phase IIb clinical trial with an enrollment of 166 subjects successfully met the primary endpoint, which demonstrated statistically significant improvement in distance-corrected near visual acuity of a 3-line or greater gain.12,13 The company plans to complete its Phase III trial in 2020.

Visus Therapeutics’ Brimochol utilizes two active ingredients that constrict the iris sphincter and inhibit iris dilator contraction: carbachol and brimonidine. The combined product gives immediate effect (within 30 minutes) and features durability that can last through most of the day (8-10 hours).14

Presbyopia Therapies’ PXR-100 uses acelcedine and tropicamide to induce miosis and mitigate accommodation, respectively. The drop causes miosis without the typical accommodative effect, thus providing improvement in near vision without impairment in distance vision with the pinhole effect, according to the company. Onset is within 30 minutes, and the effect last for 4 to 5 hours. During the trial, almost 50 percent of the subjects gained 3 lines of distance-corrected near vision acuity (DCNVA) and >90 percent gained 2 lines.15 PRX-100 clinical trials were conducted in Tijuana, Mexico, and the company expects to be in Phase III trials by the end of 2020.

Eyenovia has taken a novel approach in that its micro-dose drug delivery device can deliver a precise dosage of pilocarpine. It is based on the fact that the eye cannot hold more that 6 to 8 μL of fluid but that the average dose of an eye drop is 40+ μL. The device charges the delivery dose of 7 μL so it adheres to the surface and distributes the dosage evenly on the cornea. The combined effect lases for about 3 to 4 hours.16

More from the November issue: Novel uses of technology for systemic disease

More than a dozen pharmaco-refractive formulations being tested, with some outside of the U.S.

One notable formulation is FOV tears based in Colombia. Luis Filipe Vejarano, MD, has developed a drop cocktail composed of pilocarpine 0.247%, phenylephrine 0.78%, polyethylene-glycol 0.09%, nepafenac 0.023%, pheniramine 0.034% and naphazoline 0.003%. Unlike most of the other pharmaco refractive formulations this one allows for what Vejarano calls “pseudo-accommodation in which accommodation is allowed to occur while the miosis is kept to a minimum.17

A limited study of 14 patients showed that an improvement in uncorrected near visual acuity (UNVA) of 2 to 3 lines for as much as 4 hours.18

Follow-up to that study described an increase of +0.75 D to 1.50 D with continued use of the formulation. An observational study of 294 patients noted that with photopic pupil sizes greater than 3.2 mm, >60 percent of the subjects were able to gain >3 lines of near vision when tested monocularly. The inventor indicates his own amplitude of accommodation has increased from 1.75 D in 2013 to 3.50 D in 2017 with constant use of the drops.19

The product will be in the US licensed by OSRX (Ocular Science), a compounding pharmacy that specializes in ophthalmic formulations. Table 2 summarizes the products in development. 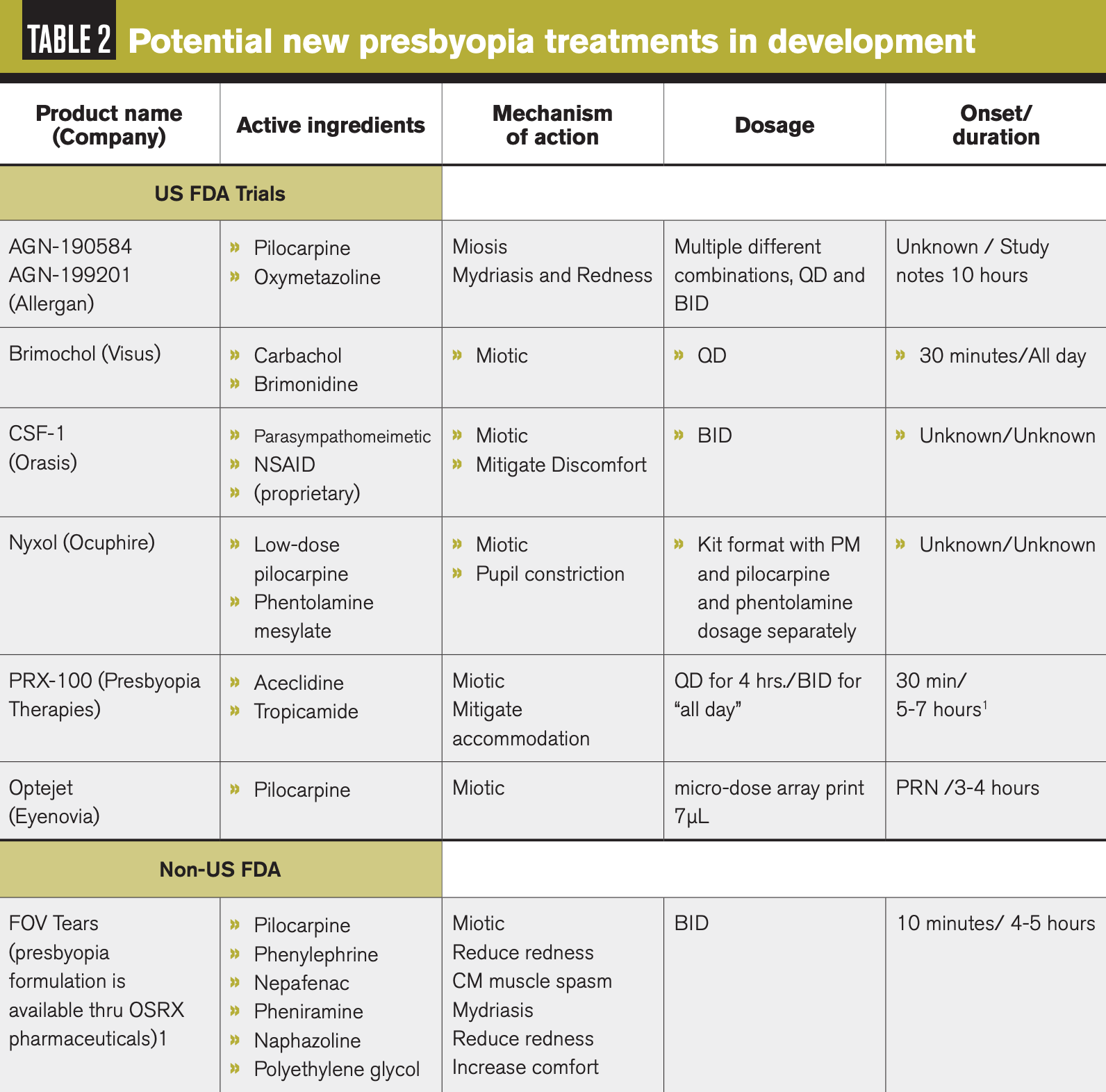 More from the November issue: 2 factors that increase risk of microbial keratitis in contact lens wearers

While the market for these products is just beginning, the opportunities for the use of pharmaco-refractive treatment for presbyopia will grow exponentially as they are approved. Whether they are applied as stand-alone treatments or in conjunction with current treatments of spectacles, contact lenses, refractive surgical interventions, or rescue therapies, they will enhance the treatment options for both providers as well as patients.

5. ClinicalTrials.gov. Safety and Effectiveness of the AcuFocus Corneal Inlay ACI7000PDT in Presbyopes. Available at: https://www.clinicaltrials.gov/ct2/show/NCT01352442. Accessed 10/23/20.

12. ClinicalTrials.gov. A Multi-Center, Double-Masked Evaluation of the Efficacy and Safety of CSF-1 in the Treatment of Presbyopia. Available at: https://clinicaltrials.gov/ct2/show/NCT03885011. Accessed 10/26/20.